45f437a112f79ef67dcb78cb5c9afbf0
Wall Street banks and financial institutions have been beating the drum of “blockchain without bitcoin” for a couple years now—excitement in blockchain, the distributed ledger technology that underpins bitcoin, but hesitation, or outright dismissal, of bitcoin and other cryptocurrencies. Then, at the end of 2017, when the price of Bitcoin, Ethereum, Litecoin, XRP and other digital coins surged to all-time highs, big names like Nasdaq, CME, and Cboe rushed into bitcoin futures, and the “blockchain but not bitcoin” narrative quieted down.

Bank of America is still saying it.

In an interview with Yahoo Finance at the World Economic Forum in Davos, Switzerland, BofA CEO Brian Moynihan was asked for his thoughts on bitcoin. He immediately turned to blockchain: “We have more patents, I think, than almost anybody in blockchain,” Moynihan said. “We believe in the idea of distributed ledgers, and smart contracts, and all the words you hear about that. We are developing stuff… But it’s not new concepts. The Registry of Motor Vehicles is a distributed ledger. We know who owns a car, we know who owns a house. The idea is that you can do it more electronically, and can do it across borders.”

Moynihan then turned to bitcoin. “The question of an anonymous currency, that’s a policy question that people have to answer,” he said. “But the idea of digital movement of money, and blockchain, we’re all for.” (Note: Bitcoin is not actually fully anonymous.)Bank of America CEO Brian Moynihan talks to Yahoo Finance in Davos, Switzerland

Moynihan’s claim about patents checks out: a company spokesperson says BofA has 48 blockchain-related patents and patent applications. A search of Google’s patent database shows Bank of America owns 27 patents containing the word “blockchain,” 36 that include “bitcoin” and 39 that include “cryptocurrency.” And there are likely a few that have a differently-named assignee.

The most recent of BofA’s blockchain-related patents, published in May, is for a “blockchain alias for person-to-person payments.”

While BofA does appear to have more blockchain patents than any other big bank by a wide margin, it isn’t alone in this race. Wells Fargo filed for one last June that was published just last week: a patent for an “international trade finance blockchain system.” The patent describes, “generating a blockchain-based letter of credit (“BLC”) relating to a contract for a trade transaction between a seller and a buyer.”

As Yahoo Finance reported back in 2016, big banks are hurrying to hire blockchain-related positions. What it all will amount to is a different question: for now, most of what banks have announced are pilot tests or partnerships with enterprise companies that build blockchains for banking, like Chain or Ripple. On the other hand, Walmart and IBM have used blockchain as a ledger to track food shipments.

As for investors rushing to buy up coins in the hopes that their value will rise, in what Moynihan calls “the speculative side” of the crypto boom, “We can’t get in the middle of this,” he said. “We don’t trade it, we don’t have anything to do with it, because that’s really up to people to make that decision, we’re not going to participate in it.” He meant bitcoin, though he never used the word once in his answer.

The message is clear. For now: Bank of America is “all for” blockchain, but “not going to participate” in bitcoin. 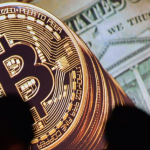